Is ex-convict and Counties evangelist Clive Cornish’s incredible walk an act of love or lunacy? What do you say?

On Monday 18th June, Pray Wales 2018 begins. During this unusual event, Counties evangelist Clive Cornish will carry a large wooden cross 500 miles around the perimeter of Wales. Clive’s cross measures 12 feet x 6 feet and weighs 50 pounds. The walk will start from Clive’s home in Ely, Cardiff and Clive will return home on the 18th July.  Yes, Clive will complete a marathon a day for one month.

Clive walking, running and climbing with the cross

To many people this gruelling expedition will be seen as lunacy. But for Clive it provides a unique opportunity to challenge the people of Wales to think again about the Christian message.  “The cross is a powerful symbol of God’s love for each one of us, and I’m excited to be walking through Wales”, said Clive.

For God so loved the world, that he gave his only Son, that whoever believes in him should not perish but have eternal life.

God shows his love for us in that while we were still sinners, Christ died for us.

Clive, who comes from a broken background, knows that it was God’s love that rescued him from a life of alcohol, drugs, crime, violence and prison. In an Inspire magazine interview Clive said –

“I was born into a family with my mother, brother and sister being severely disabled and felt pressures of life very early on due to being the only able-bodied person in my family. I never felt that anyone loved me, and felt alone, different and rejected.

My first conviction was at the age of 11 for shoplifting. I began sniffing glue, gas, petrol and other substances to escape life. At this time I befriended some people from a care home and unfortunately was sexually abused by one of them. When I was 14 I’d had enough and attempted suicide, not a cry for help, just concluded that if I didn’t like me, how could anyone else?

I developed a drink problem by the age of 15, being quite proud of how much I could drink, and making my own home brew. Burgling houses kept me in pocket. School was my most disliked place. I often paid my mother to stay at home. I was caught again at 15, this time actually in the house I was burgling and received a probation order.

At 18 years old, a neighbour asked if I wanted to go a meeting where they prayed for the sick, ‘Bible bashers’ I said, ‘well we do pray’ she said. I wasn’t keen to go, but her son was going, so I went too. An ex-highway patrolman from America was speaking. I repeated a simple prayer after this man, and something happened, I wasn’t even sure what it was! I just felt clean inside, brand new! No drink or drug had ever made me feel like that. And I changed. A couple of my family became Christians too, my mother included and experienced God in a new way.”

Therefore if anyone is in Christ, he is a new creature; the old things passed away; behold, new things have come.

Therefore, having been justified by faith, we have peace with God through our Lord Jesus Christ.

“Everything was great for around two years but then I met a homeless man and began drinking again, like I was making up for lost time! Lost my job, my flat was repossessed and I ended with a six-year prison sentence for robbery.

I actually found prison life pretty easy, washing was done, food was cooked and someone held the keys – no responsibility but it was here I was given an opportunity to look back on my life. Why I kept getting it wrong. Why I was the kind of person I was, time to look at my family. The only thing I did miss was freedom.

I served 3½ years of the six-year sentence and on my last day, I sat and looked out of the window, and thought ‘I can be in and out of prison for the rest of my life or I can mean that prayer I said … Jesus, my life belongs to you.’ It was then a significant change took place, the way I see it now, God kept His promise and stayed with me. I was released, got a job, married Fiona, we had three girls and I’ve been a full time evangelist with Counties for 13 years.”

For I am convinced that neither death, nor life, nor angels, nor principalities, nor things present, nor things to come, nor powers, nor height, nor depth, nor any other created thing, will be able to separate us from the love of God, which is in Christ Jesus our Lord.

Clive knows he was transformed by God’s love and as a Counties evangelist Clive is now walking with the cross to make Jesus known across the UK. During this journey Clive will talk to those who ask questions, hand out leaflets to those who show an interest and take time to pray with those who request it.

If you are wondering whether he will complete this challenge be reassured Clive has walked over 5000 miles, climbed Britain’s highest mountains and run in many half and full marathons with the cross. Details of Clive’s inspiring journeys can be found at www.threesixteen.co.uk  and an e-book, containing carefully selected images (90 photographs) and inspirational stories, can be downloaded at https://www.threesixteen.co.uk/resources/books/. The e-book is available for free but please, if you are able, make a small donation and help support our work.

During the walks Clive has endured both verbal and, at times, physical abuse from those who take exception to the image of the cross. Once while walking through the Valleys of South Wales Clive was physically attacked by an 80 year old lady who tried to beat and strangle him. While her hands were firmly around his throat, Clive marvelled at how strong an old lady’s grip could be!

For the word of the cross is folly to those who are perishing, but to us who are being saved it is the power of God.

The responses to Clive’s walks are amazing and Clive is still hearing of lives that were touched and changed by the sight of the cross. The cross asks “Do you believe in God”. It is an important question and one that each one of us needs to answer. Clive said “Yes” and his life was transformed. What do you say? 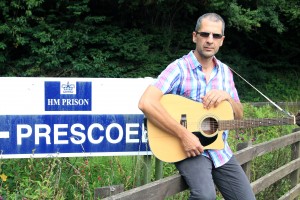 Clive also enjoys writing and performing his own music and songs

When he is not walking with the cross Clive is involved in prison work and studying towards a degree in Theology.

“I am now involved with prison work visiting Prescoed Prison to lead a service and also helping those released by teaching successful living in Christ. My heart is to ‘teach successful living’ upon release. Becoming a Christian whilst in prison is great! But the problem is that you only know the life you led before prison, and it certainly isn’t the same upon release, many are set free from prison but remain captive to prison life, or in bondage to worldly life.

My experience tells me that my nature wants to do the things I know, and I have to choose daily to do things Jesus wants me to do. A current friend at Prescoed recently said, ‘ I found Jesus on my first day in prison, and I’ve never been so happy, I’m afraid it will stop when I get out’.

Clive hated school and left education at the earliest opportunity with no qualifications. To his amazement he is now completing the first year as a student at Malvern College and cannot believe how much he is enjoying his Theology degree. He described his initial efforts “as failing successfully”, but in a recent interview with Threesixteen said, “I think I am getting better, I have actually just passed my first module, but that was hard work, goodness me!” Clive believes the Holy Spirit led him to Malvern, stirred the hearts of the admission tutors and now provides his strength and encouragement.

For I know the plans I have for you,” declares the LORD, “plans to prosper you and not to harm you, plans to give you hope and a future. 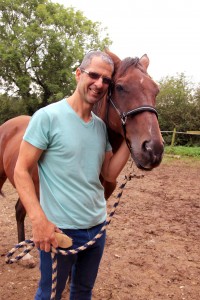 Clive “on the farm.”

To relax Clive enjoys time with his wife and three children. He also loves to escape to his “farm” a couple of acres with a two horses where he can “get himself together and do a lot of praying.” As Clive undertakes the challenge of walking 500 miles around Wales please remember to pray for him, his walk and the people who will be challenged by the sight of the cross.

The Lord is my shepherd; I shall not want.

2 He maketh me to lie down in green pastures: he leadeth me beside the still waters.

3 He restoreth my soul: he leadeth me in the paths of righteousness for his name’s sake.

4 Yea, though I walk through the valley of the shadow of death, I will fear no evil: for thou art with me; thy rod and thy staff they comfort me.

5 Thou preparest a table before me in the presence of mine enemies: thou anointest my head with oil; my cup runneth over.

6 Surely goodness and mercy shall follow me all the days of my life: and I will dwell in the house of the Lord for ever.

If you want to ask Clive a question you can e-mail him at CliveCornish7@gmail.com

No images found!
Try some other hashtag or username